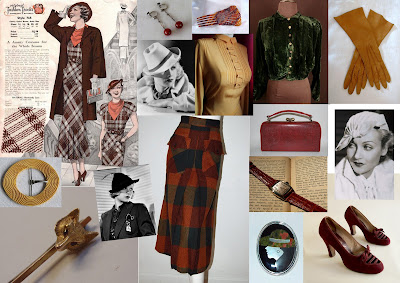 Everything takes a little longer with me :) but I have slowly given in to those cries in the wild. I'm talking about the long, wistful, courting cries of the fall fashions. I guess you could say that I am now "in season". Every bit like a mating pheasant, I am now prepared to make a show of myself, parade my crush, dazzle you with my splendid colors...
Uh, if only it was March and that might work! However this time of the year the chances are of ending up in a pan. A fallen pheasant. Such are the tricks of autumn.

Ok, so my writing is rubbish! Frying talk aside (or brain-freezing more like), here are some wannabe credentials: the magazine pic is from flickr, the clothing pictured sold a little while ago on Ebay (I'm still in pain about that skirt), the mother of pearl and onyx brooch is a modern but deco inspired piece that was available on the same site, black and white photos are from doctormacro, and I shamefully admit I can't remember about the rest.
But I am now officially in autumn mode, I just wish the weather was too, instead of lingering in some unknown limb-like gray season that doesn't quite match my fantasies of lust and deceit.
Posted by garofit at 02:44