The spring is here, and so is this beautiful dress to go with it. There is a whole saga around this dress, and very emotionally charged too. I thought I'd share with you the sweet-bitter taste of this latest project that was to be the perfect dress...
Sure enough, every time I look at the picture that inspired it, I think that dress is perfect. 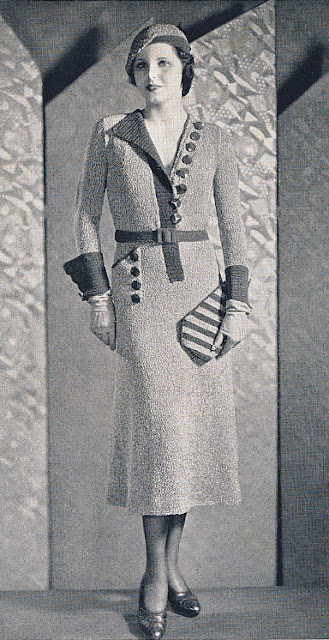 I spent months hunting knitting silk that wouldn't cost a fortune, would be the right thickness, quantity and color etc. The dress in the inspirational pic is knitted in 2 shades of green: with the eyes of my mind I had envisaged this coral and cream beauty...Coral proved impossible to get, so I settled for cream with olive green. But olive green proved elusive too, so I thought I'd try a brick shade instead. The accent color I purchased and had delivered straight at my mother's proved to be too thick, and she bought something else herself, going back to the initial olive green plan, but in a shade that I didn't get to check out.
Enough to produce major anxiety: I guess I am a bit of a control freak in these matters, because I know there are a very limited number of projects left in the bag, and I really don't want things to go wrong, so I am trying very hard to give them the best chance of succeeding. 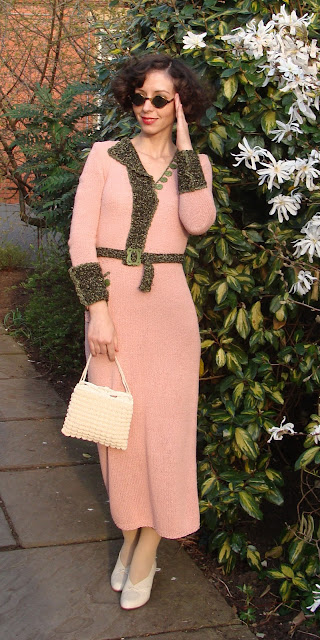 Anyway, that was that. The dress was completed, mother tried it on my sister, she came to the conclusion that several things didn't work, she unraveled most of it and did it again. Once finished and happy with the result, she hand washed it - the yarn instructions recommended hand washing - and the silk changed color, lengthened and became shiny! She ended up putting it in the washing machine not knowing what else to do, which interestingly enough restored the length and the matte finish, but the color change remained permanent.

Now the trouble was the accent color purchased didn't work anymore with the new color of the main dress, so she had to improvise again, adding a bit of black to it. Personally I don't see how that helps, but then I didn't see that yarn knitted without the black in it, so it could have very well been worse. Perhaps a different shade of green would have worked better with the new pink...But the bottom line is that instead of a cream dress with olive accents I now have a pink dress with a green and black mixture in the cuffs and so.
Now this wouldn't be too bad if the pink suited me. Sadly, it doesn't. I look washed out and sallow. It's a funny shade as well, looks cold in some lights, warm on others. The green in it helps a bit, but not a great deal. I was told the new combination is far more authentic looking. While I agree the pink is more vintage sympathetic, that alone doesn't make it look good on me. 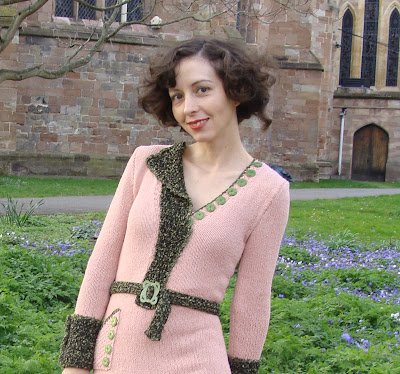 As you probably can tell by now, the yarn itself is very strange. Rosario, made in Portugal, it is 100% silk according to the manufacturer. I don't know if by any chance someone has tried this yarn as well? The fiber is very short, porous, matte, and bits kept flaking of as it was knitted and also now during wear. I really don't know what kind of silk this is, what exactly it is made of. From close up the knit looks as if I had the dress for years and years and washed it again and again - basically worn. 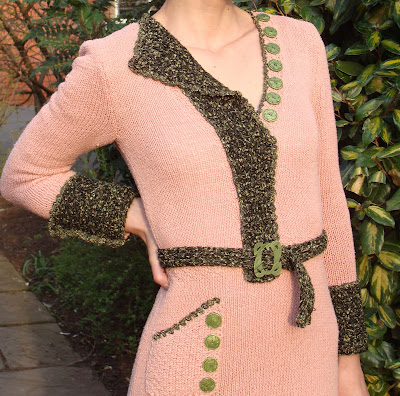 On the bright side it does mold to the body shape and drape well. Bearing is mind this was knitted from a picture! at long distance, based on my measurements only, without a pattern, I believe this dress is very near perfection in terms of fit. Sorry for the even more pics than usual, they are for my mother to see. As I said the fit criteria is fully met, and the dress feels absolutely lovely on and wears beautifully - I do actually believe it's better in reality than in the pictures from this point of view.
The other day when I wore it I received a ton of compliments, people stopped me in the street to say what a fabulous dress it was, and that who made it was an artist. Mum was chuffed about this!
It is a fabulous dress indeed, I just wish I would make it better justice. 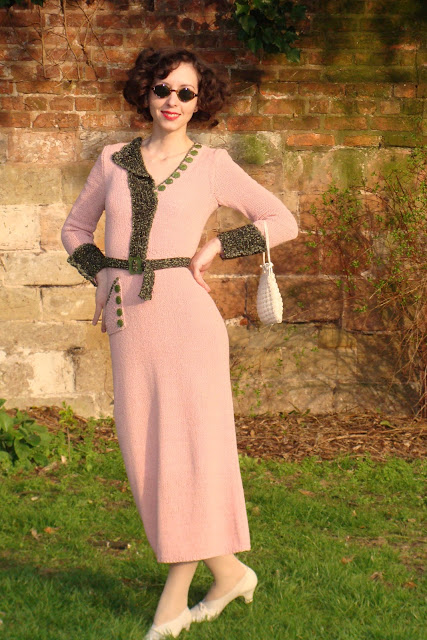 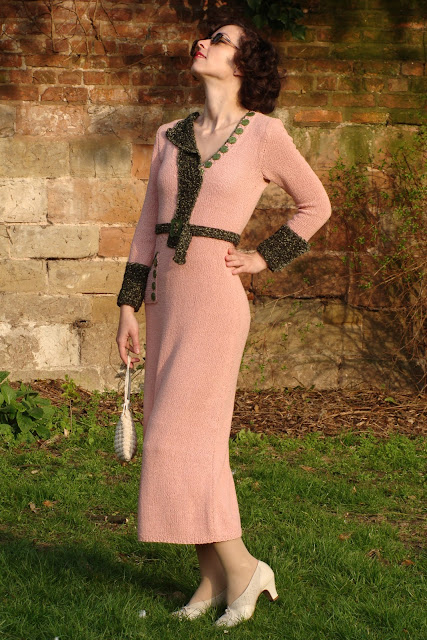 In terms of actual comparison with the original pic, again things are sadly not to my advantage. Most to do I believe with the body shape difference between me and the model. She is very wide in the shoulders and quite a bit taller and bigger judging by the size and number of those buttons. My narrow shoulders don't quite fit the bill so perhaps this "to be perfect" dress was style wise a crooked choice from my part from the very beginning.
The dress I have appears also less wide at the bottom, and the general shape  of the original one is more straight up and down - I see no reason for not obtaining that on my ruler (if pear) shaped body- here perhaps a closer effect would have been obtained with a heavier yarn ans a slightly more A shaped skirt? Or really is  it all dictated by those shoulders?
Everything else is rather minor: it is a bit too long, my fault entirely, worried that it wouldn't come out too short I went the opposite way. The centre panel doesn't have the same length as in the pic, but within being thicker than the rest of the dress that's probably for the best. I would have like the cuffs wider, and the mid panel wider too at shoulder level, more in keeping with the original. The belt is not right either. To some extent these aspects are correctable, and to me also very important, because I think details like these bring authenticity, so getting them right is no small matter. 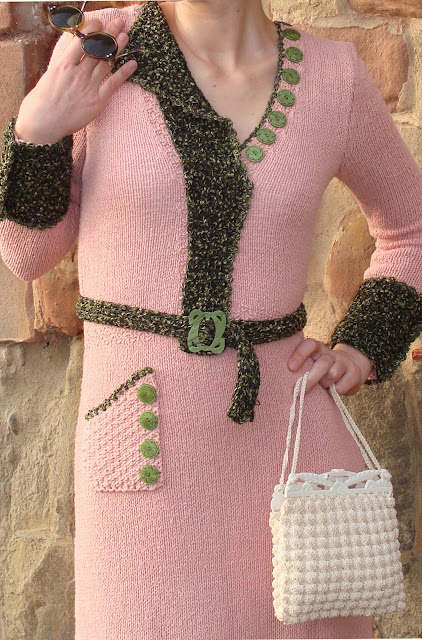 So there it is, totally grilled by me in a manner that makes me look completely ungrateful. I assure you that I am not, and I appreciate it for what is is, a beautiful dress in its own right, beautifully executed,  a great result obtained in difficult circumstances. Which is even more daunting, as it tells me the vision I had could be realized...but it wasn't realized now.