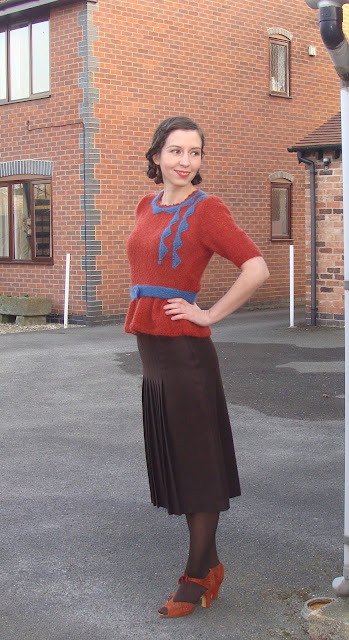 Here is the next one in the project pile, a blouse in paprika/rusty red and blue mohair. I have no idea what the original colour scheme was, I image something a lot tamer (pale yellow plus brown, or perhaps pale green plus dark green??), but I thought my choice was positively vintage, if  rather intense.
It should suit an Autumn, but I must be careful with the blues.
I long for blue, probably because I can't wear it much as most shades look disappointingly bad on me. Still, I thought I could risk an accent. In retrospect I am not 100% sure it was the right shade as the contrast seems particularly vivid, but I think it works overall. It kinda has to, now. 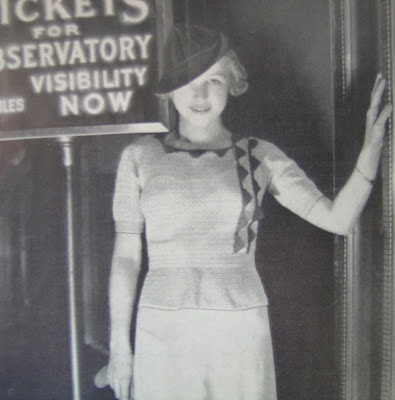 What about the comparison test? The original is crochet, but mothers talents and current eyesight don't go that far. Due to the texture of the mohair, my blouse looks bigger/heavier when in fact it is light as a feather.
I would have like the blue triangles better defined and only stitched down on the one side, closer in that to the inspiration source, but for some reason mum decided to proceed otherwise.
They are not coming down either as much as in the 30's pic, this is partly to do with insufficient yarn (the blue being a remnant from another project) and partly with the fact that the waist line is really high on this blouse. I felt it was a bit too high to be correct as it sits right below the breasts, empire like, nearly mid way through the blouse. We usually encounter the opposite problem of not being able to place a waist high enough, but not this time :) 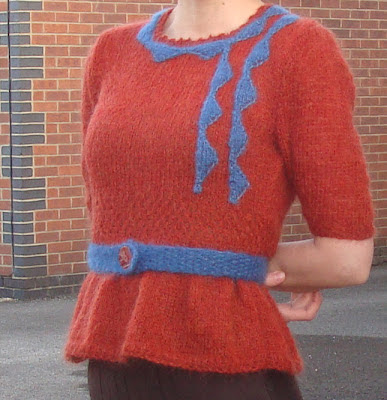 I wish I had taken pics without the belt for this to be more apparent - and to check if indeed it looks the way I see it in the mirror!. In any case, in order to correct what I believe to be a departure from the original style I used the belt - produced for a different item - and placed it slightly lower, at the base of the current waistline and where I think the waistline should be. It does the trick, but creates a bit more ruffle around.
The sleeves are slightly longer, and I had pulled them up to create puffiness around the upper arm, but they had slid down again by the time of taking the pics. All in all, it may not be perfect to a "t" but I am pleased. Hurray again to long distance knitting! 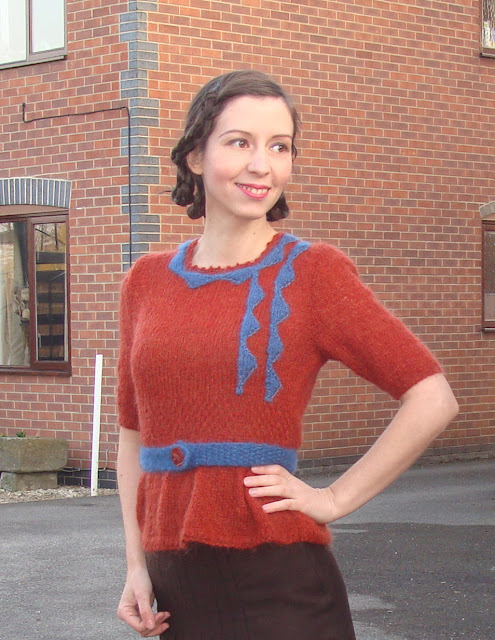 30's inspired top, knitted in a blend of kid mohair and silk -
the blue one is Debbie Bliss Angel in the shade 08
(this was called anything from Denim to petrol, air force blue and soft navy !!!!)
70's wool pleat skirt, etsy;
70's rust suede shoes, bought at a vintage fair, because I love this shade
and the style looks to me very 30's/40's. 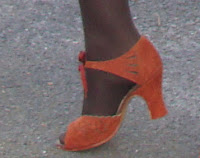