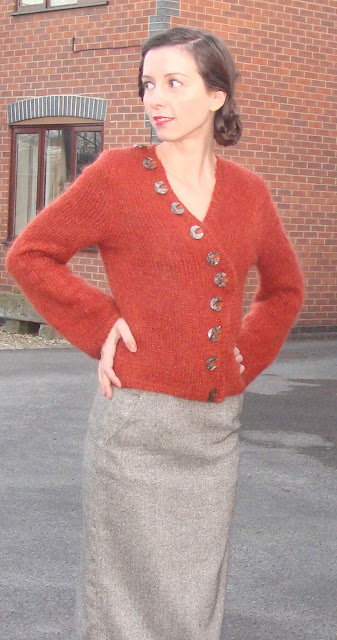 What you see is the - so far - result of a rather less successful knitting attempt in the series of projects I keep boring you with, made in the same mohair and silk blend as used in my last post. Going a long way, this yarn proved to be more than enough for the blouse you've seen previously and a jumper that I am yet to show. The one shown today was made from spare yarn, and there is still enough left for a skirt, all this from less than1 kg of yarn. 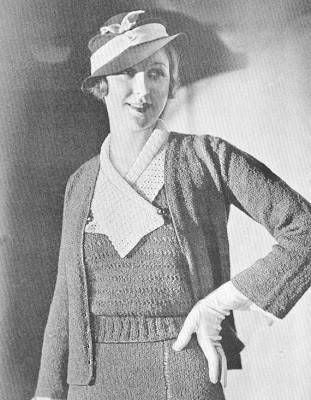 And now to the troubled bit: I wanted a cardigan along the lines of the one worn on top above, so a very simple knit I thought, so simple I didn't think necessary to be very specific when discussing it with mother. So much for not taking the trouble! I ended up with this (ignore the buttons for now, they are an afterthought): 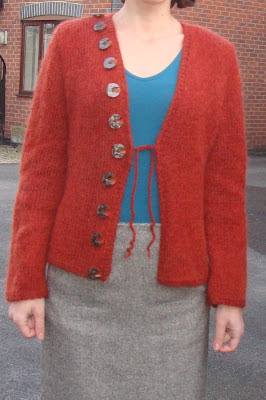 To say that I don't like it is an understatement... It's looks too big everywhere, it falls all wrong, it's too bulky as it was knitted in 3 - mum wanted to make sure it wasn't too flimsy!!! And it is a lot worse when it it's fully open. Such a shame, as the knitting itself is nice and even with lovely yarn definition on the basic stitch employed. It feels lovely on and very light - but looks heavy and shapeless...arrgh!! I am wearing it here with a vest and long sleeve t-shirt underneath, but even over something more consistent, it still doesn't look right.
So I started fooling around with it and wrapping it more around me into the shape below. With the ad of a set of buttons I tried to create a feature where there was none, and went for the asymmetrical fastening so popular in the 30's. At first I wanted to use some butterscotch yellow buttons for a typical 30's contrast, but I only had 3 of those, so settled for the ones you see, and put on lots! Perhaps too many?...It's all for decorative purposes of course, as the actual fastening is hidden underneath. 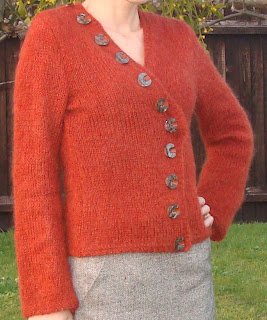 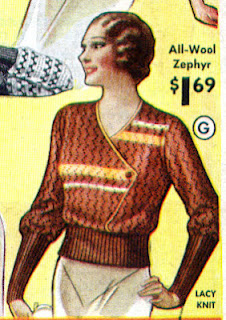 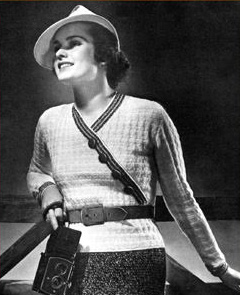 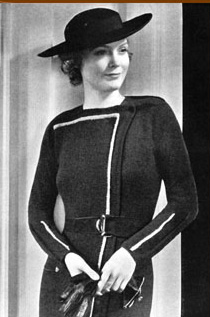 Then the thought occurred of rearranging my plentiful buttons so they go around the neck and perhaps ad a belt matching the bronze-grey of the buttons to help further shape this jumper in the way I crudely attempted to draw here.

Yet apart from these cosmetic issues there may be a need for proper intervention as the underarm area still looks bad regardless of how much the sides cross over...Perhaps a re-work and narrowing of the back? Unless I manage to sew - invisibly?!- the excess in all around the arms to make the shoulders fit better and pull up the sleeve too..
Let me know your thoughts and ideas. 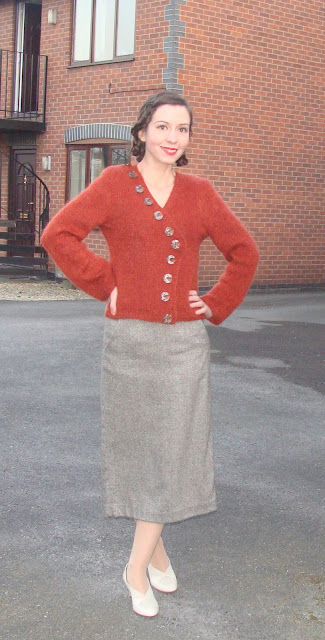